I'm Joshua. I've been in the micro community since 2003. I go by the handles Digclaw and Wiseman.

Around December of 2002 I was on Alvaro's comic boards and accidentally clicked on a Superman thing and ended up at the JLA micro heroes site.

That led me to other micros sites until I arrived at the lilguys collective page. about a month later I joined the Lilguys group and two or three months later I posted my first micros. They were the original versions of my JAA characters. Around that time Robert Bradley had made the first Byrne and Kirby templates.

I saw some X-men micros from the Thomas/Adams era and decided there should be Neal Adams versions. So I got out my Neal Adams X-Men Visionaries and made a crude Neal Adams template. I made some micros from the Thomas/Adams sentinel story and sent my template to Robert Bradley to see what he thought. He gave me advice then made a better version of the Adams template and made Avengers. I then started work on my second template. I made a Marc Silvestri template using issues of uncanny and the x-men vs avengers mini series. I also made Starman micros using a Tony Harris template I had made. Early on I became obsessed with reference matching. I started wanting my micros to look as much like the original source as possible.

Somewhere around here I made my first Megaman micros which later got revamped.

Then Yahoo stopped storing images and the Monje archive era began. They were actually some fun times. During that era I began my crisis on infinite earths series using Robert's first Perez template. I began my flash micros around this time too.

Kat hosted a cartoon micros contest and I created Smurfs, early versions of my Transformers, Mask, Bravestar, my first version of BP Vess from COPS, Quicksilver from Silverhawks.

After Monje's archive ended, I started my Doctor Who micros.

I tend to let my micros speak for me. 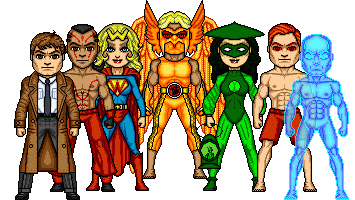