Edit
watch 01:36
We're Getting Mutants in the MCU - The Loop
Do you like this video?
Play Sound

The original versions of these Micro-Heroes were made by Donar (Gavan Carstensen) with his first Micro-hero, Spider Jerusalem debuting in the summer of 2001 on the Warren Ellis Forum. The name 'Micro-heroes' was chosen by Carstensen over 'Pocket Powers' which he felt "sounded too manga." More quickly followed and they were widely used as avatars for signature files on the message boards at Alvaro's ComicBoards.com.

Originally, they were based on an image from the site of a company marketing (storTropers) an applet which used Java to make similar avatar graphics. Resourceful fans changed the basic look of the Stor images and some later animated them as their favorite super-heroes. Among the most prolific early Micro-hero makers were Donar (Carstensen), Torch (Rich Bellacera), Whirlwind, Michael Kaiser, Bobster (Robert Bradley), AG (Scott), 1401, Jay Phoenix, Archangel (Chris Lund), Erik!, OMike (Michael Bradley), Ralf Haring and Lightningstrike (Mike Berry).

When the Lilguyz mailing list started on Yahoo, Yahoo archived picture attachments with the messages. In 2003, this practice was ended, and without an archive log of micros and templates to access, two were eventually started. The first was Johnny Patches's Micro Template archive. Another early archive was Ze Ball Beaker Micro-Heros Site. The first 'official' Lilguyz archive was the Brad Monje's Official Lilguys Micro-Hero Archive. Monje's archive eventually ended due to the lack of time. The community understood and thanked him for the many months he kept the archive running. This still left a void since other sites and archives were incomplete. Soonafter, Ben Cooper, a Lilguyz member stepped up and started the Foxgnaws Micro- and Pixel-Hero archive.

Eventually Micro-heroes began an off shoot of pixel art known as Pixel-heroes. Originally created by Cooper, these truly micro-sized characters are the mini-mes of the Micro-hero community. Pixel-heroes are accepted as a form of micros and apear commonly in most Micro-hero groups. 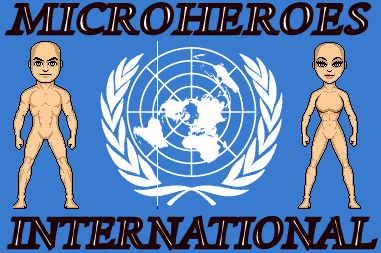 Around 2004 the Lilguyz mailing group, had gotten so large that many long time members started to branch off and start other groups. Some creators gathered on live journals and blogs, while others gathered in message boards. A prominent one of these boards was a French group that eventually grew to include multiple nations, renaming itself Micro-Heroes International in late 2004. Due to rapid growth during 2006, Micro-Heroes International splintered into multiple satellite boards. At the end of 2006 MIB shut down and reopened as MIB II.

In 2006 the original template became available for use again when storTroopers.com placed them under a Creative Commons License, allowing their use for non-commercial purposes. With this news, members of the Micro-heroes Yahoo Group resumed making and posting them to their own group.

Community content is available under CC-BY-SA unless otherwise noted.
Advertisement